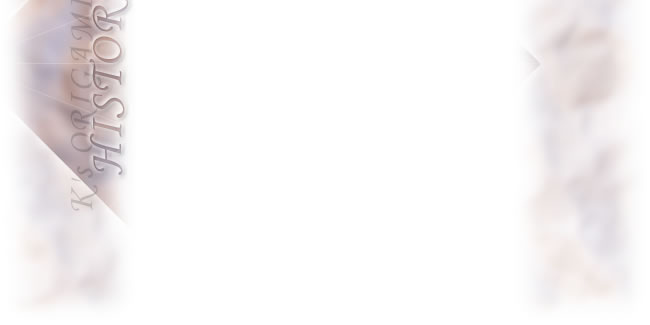 The word "origami" comes from Japanese ORIGAMI. ORU means "to fold", and KAMI "paper". You may think it is quite natural that we call the art of paperfolding ORIGAMI in Japan. But it's not the case. The history of the word ORIGAMI is pretty complicated.

From the HEIAN Era (794-1192) to the EDO Era (1603-1867), ORIGAMI or ORIKAMI meant just "folded paper", the same as FUTOKOROGAMI, KAISHI, TATOGAMI, or TATO. Even now, ORIGAMI-TSUKI (with folded paper) means "authentic" because connoisseurs write their appraisal on pieces of paper folded in half. ORIGAMI especially refers landscape pieces of paper folded in half latitudinally, on which they wrote letters or lists.

Then, what they call the art of paperfolding? In the EDO Era, origami was called ORIKATA or ORISUE. In the late of the EDO Era, they came to call origami ORIMONO, and started to use ORIGAMI to refer to "pieces of square paper to fold".

In the MEIJI Era (1868-1912), when Japanese learned European educational methods from Germany, they translated "papierfalten", or paperfolding, into SHOSHI, TATAMIGAMI, or KAMITATAMI. These words were used only in the kindergarten.

In the middle of the MEIJI Era, they came to call origami ORIGAMI. Maybe men used ORIGAMI and women used ORIMONO. As ORIMONO disappeared in the SHOWA Era (1926-1989), we use only ORIGAMI now. We call, not only the art of paperfolding, but also "pieces of square paper" and "folded models" ORIGAMI.